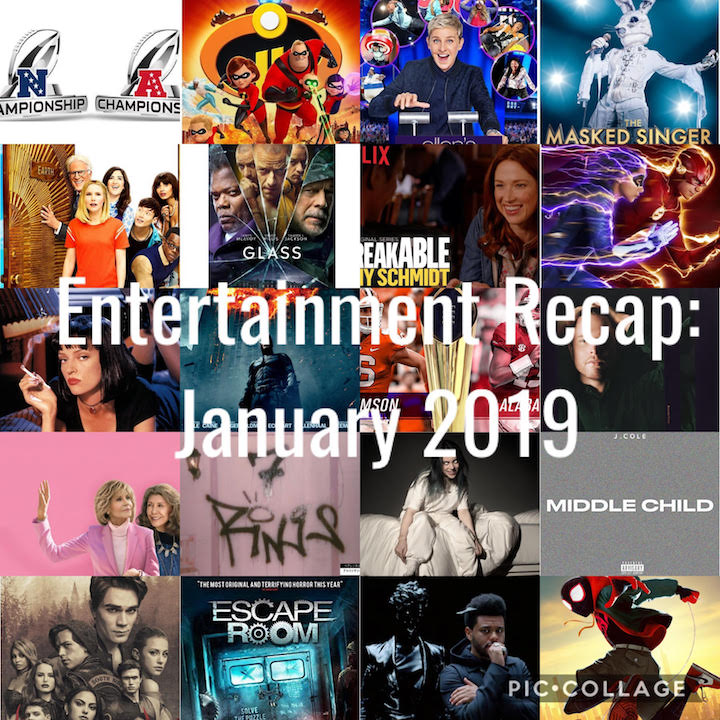 From music to film and television to sports, January already makes it seem like 2019 is one for entertainment. Artists tease their fans with upcoming projects, actors and actresses show intriguing performances on the small and silver screen, and athletes alike compete for national titles.

These few highlights come from some of today’s biggest names in music: Ariana Grande, J. Cole, Billie Eilish, The Weeknd, and James Blake.

Ariana Grande’s release of late-2018’s “thank u, next” made fans crave for more of what makes her so popular. Jan. 18’s “7 rings” answered her fans’ wishes and features a remix of “The Sound of Music’s” “My Favorite Things”, where the singer elaborates on her life ever since the breakup with her once-fiancé, Pete Davidson. Although fans were introduced to this through “thank u, next”, Grande’s most recent single focuses more on the positives of the aftermath of her relationship and is exemplified by phrases like “I’d rather spoil all my friends with my riches” and “I want it, I got it”. Grande also recently announced her next album, “thank u, next”, and its Feb. 8, 2019 release date.

The last we heard of J. Cole, at least on a solo piece, was in his recent album “KOD”. But since then, Cole dropped “Middle Child” and brings back elements of his most famous projects while tying it in with strong instrumentals. Cole elaborates on his personal views of the current hip-hop industry and mentions artists like Drake, Jay-Z, Kanye West, and Lil Pump when discussing the existing highs and lows of rap.

Billie Eilish became one of the most successful artists of this generation at only 17 years old with her first song “Ocean Eyes” on SoundCloud. Her past release of her EP “don’t smile at me” launched her music career, but since then Eilish has released four singles, most recently “bury a friend” on Jan. 30, 2019. Eilish’s debut album “WHEN WE ALL FALL ASLEEP, WHERE DO WE GO?” will come out March 29.

The Weeknd’s single “Lost in the Fire” and James Blake’s album “Assume Form” both dropped this month and featured unique styles of music that very much contributed to January’s best music.

Although the movies of January weren’t the strongest in quality, they definitely reached out to many fans as “Glass”, “Escape Room”, “The Upside”, and “A Dog’s Way Home” ruled the box office for January release dates. Even though they weren’t released in 2019, “Aquaman” and “Spider-Man: Into the Spider-Verse” still placed high spots in the film office records as “Aquaman” broke the billion dollar record and became the highest-grossing film in the DC Extended Universe franchise.

The beginning of the New Year may mean new resolutions, but it also means new content for fans of television. Whether it’s the continuation of current seasons’ plots or introductions to new and old shows alike, television seems to still be a strong factor for this year’s entertainment category. Long-awaited, action-packed seasons from series like the CW’s “The Flash”, “Arrow”, “Supergirl”, “Black Lightning”, and “Riverdale” continue their stories this month while hit game shows like “The Bachelor”, Ellen’s “Game of Games”, “The Masked Singer”, and The Rock’s “The Titan Games” also make major impacts for television, whereas dramas and comedies like “This Is Us”, “The Good Place”, “Grown-ish”, and “Brooklyn Nine-Nine” still continue to conquer as two of the most popular categories of TV today.

Streaming services like Netflix also played a large role in January’s world of entertainment. Some of film’s biggest hits made their way to Netflix: “The Dark Knight”, “Pulp Fiction”, The “Indiana Jones” series, “The Addams Family”, Marvel Studio’s “Ant-Man and the Wasp”, Disney-Pixar’s “The Incredibles 2”, etc. Netflix original series also seemed to be extremely popular among fans and were definitely not disappointments as many returning and fresh shows like “Unbreakable Kimmy Schmidt”, “Gracie and Frankie”, “Friends from College”, and “Sex Education” made its way to the app/website.

Named easily as America’s most popular sport, football featured two of its most-renown sporting events in January: the College Football Playoff National Championship and the final round NFL Playoff games.

The 2019 College Football Playoff National Championship game came as an unexpected one. The undefeated Clemson Tigers of South Carolina defeated the Alabama Crimson Tide 44-16 on Jan. 7. Leading up to the game, Clemson took the No. 2 spot in NCAA rankings while Alabama placed at No. 1.

The final round of the NFL playoffs took place on Jan. 20 and featured the New England Patriots vs. the Kansas City Chiefs fighting for the AFC Championship and the Los Angeles Rams vs. the New Orleans Saints for the NFC Championship. The Patriots and the Rams came out on top and will face off in February for the Super Bowl title.