The All Out March for Education 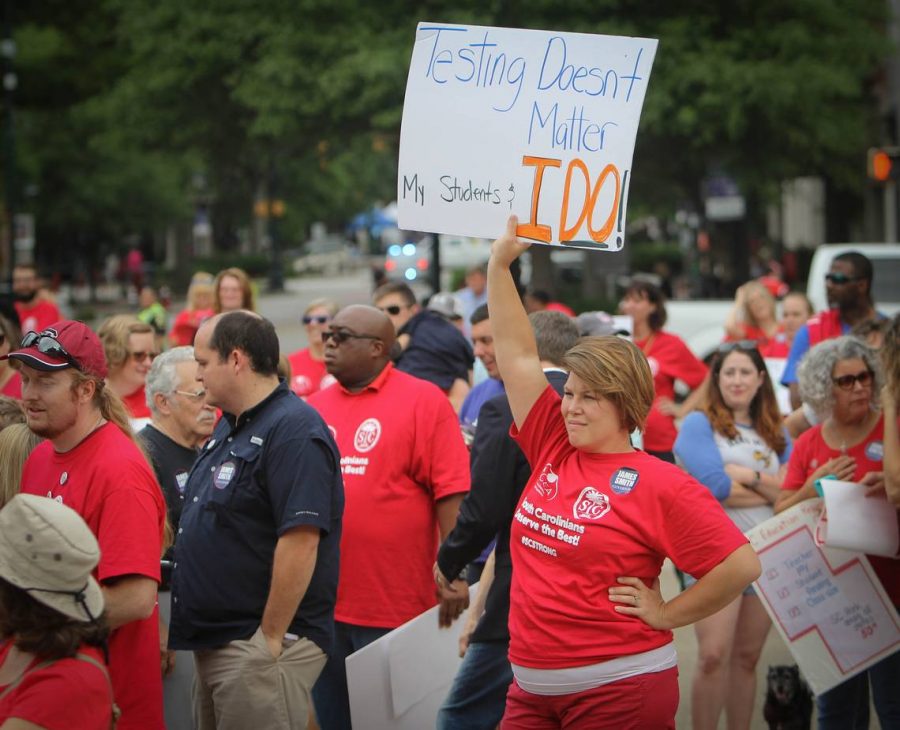 Every year, the US News and World Report measures how well each state is educating their students and ranks them accordingly. South Carolina is currently ranked 48 out of 50, meaning the state’s education system is the third worst in the country. With a graduation rate 3% below the national average, and an average debt-after-college-graduation $2,000 above the national average, South Carolina’s inept school systems are suffering from a myriad of problems.

The teachers of the Palmetto State, however, refuse to stand by and allow the government to overlook the importance of education any longer. A teacher alliance called SC for ED has organized a teacher walkout for May 1, in which teachers will travel to the Capitol Building in Columbia to protest what they feel are poor and negligent conditions of their profession.

SC for ED describes itself as “an organization created by educators that aims to improve the public education in South Carolina.” SC for ED originated as a Facebook Group, which now has over 20,000 members. Now that their popularity has skyrocketed, they plan on expanding their influence and organizing a variety of new movements in an effort to fix the educational system, including:

– Meeting with members of the South Carolina School Board Association

– Meeting with members of the SC Education Oversight Committee

– Hosting county meetings for educators, known as “Palmetto Caucuses” to discuss issues in education across the state

– Mobilizing educators to contact their representatives and school board members

On Wednesday, May 1, SC for ED has planned a statewide teacher walkout called #AllOutMay1st. The event was posted on their Facebook page, and more than 2,500 people have said they are going. The details and itinerary were both posted along with the event:

“Join us beginning at the State Department of Education as we march for our students, our schools, our communities and our state! Those that care about public education in South Carolina demand better teacher pay, smaller class size, removing other duties as assigned from teacher contracts, less testing and a pledge from our legislature that they will say no to for-profit charter schools and educational savings accounts.  The 4% raise is a positive step forward, but it’s just one step. Join us as we march for the future.

At South Pointe High School, 13 teachers are officially participating in the walkout. One of those teachers is Mr. Ethan Wallace, the 2018-2019 Teacher of the Year. Wallace has taught at South Pointe for seven years. He teaches CP US History, Teacher Cadets, AP European History, and IB History of the Americas.

“I will be [participating in the teacher walkout]. I made the decision earlier this week,” Mr. Wallace explained. “I’ve been more of an observer of SC for ED for a while – I’m a member of their Facebook group – but I haven’t done a whole lot to participate in the things that they’ve sanctioned. I’ve done things like contacting my representative and things like that, but I haven’t actually participated in SC for ED yet. I decided this week that it was important that I do that; that I make my voice heard for the issues that we’re facing in education right now.”

As far as the response to the upcoming event goes, South Pointe’s principal, Dr. Marty Conner, has shown tremendous support for the politically-active teachers.

“Here at South Pointe, Dr. Conner has been very supportive. When I emailed him saying that I had made this decision and felt it was important, I told him how I thought it was a good opportunity to model for our students, and he said that’s great. He totally supported it, and supported me as Teacher of the Year representing the school there in Columbia,” Mr. Wallace said. “At our faculty meeting, he gave his support to the teachers, which is awesome.”

Wallace emphasized the importance of the well-being of South Pointe students.

“Now, obviously, like I said, student safety is the most important thing. He (Dr. Conner) said, ‘Hey, we’ve got to make sure we do this the right way. We put in for our subs, fill out your personal day forms,’ When we use the word Walkout, I think it sounds a little extreme, which may be a good thing. But I don’t want anyone to think that we are just not showing up, because that’s not what this is. Teachers have a certain number of personal days that they are allowed each year, I believe the number is three. And, we’re doing it the right way. We’re submitting our personal leave request forms, we’re taking our personal day.”

Wallace also shared some of the many different issues that teachers are passionate about addressing.

“In general, most of the teachers participating are joining for several reasons. One of them is class sizes, so student to teacher ratios, which have consistently been going up and up and up,” Wallace passionately addressed. “South Carolina actually has a law that says classrooms cannot have more than 28 students per teacher, and that law hasn’t been enforced since 2010.”

Wallace added that having a room of 33, 34 freshmen is a challenging situation.

He is also concerned about teacher salary, and how it has lagged over the years.

“Teachers are actually, if you adjust for inflation, making 7% less than what they were making in 2008 which is not good,” he noted.

The issues that teachers are working to fix affect students as well. So what can students do to get politically active and help progress the South Carolina educational system? Make their voices heard.

“It’s impacting us as teachers, but it’s also impacting students. And when people say, ‘how does taking a day away from your students benefit them?’ Well, the issues that we’re fighting for are affecting them every day,” Wallace said.