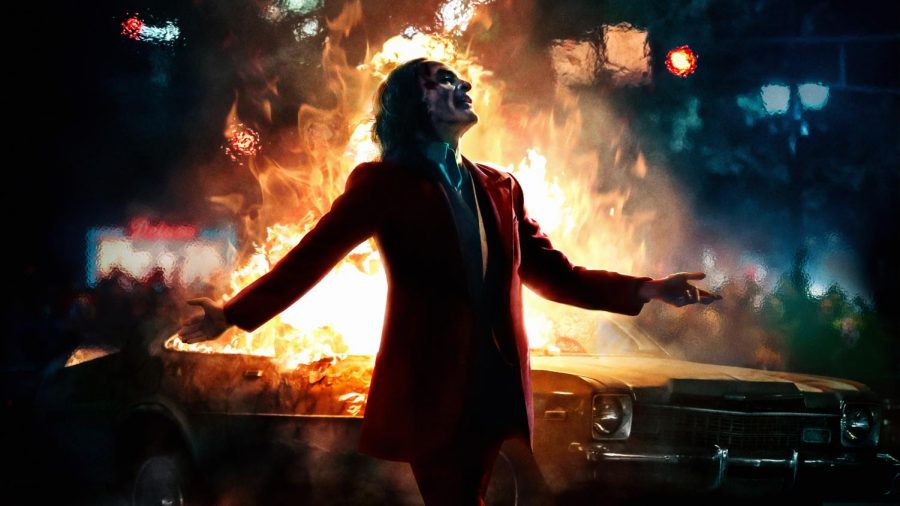 Oct. 4, 2019 came with a new adaptation of the villainous Clown Prince of Crime known as the Joker in Todd Phillip’s 2019 “Joker”, along with a new story yet to be covered in the DC Extended Universe of films covering the iconic heroes and villains many have come to love. Joaquin Phoenix starred as the crazed villain and his portrayal alone made this movie a major success, not only at the box office, but also through many reviews.

From plot to character development, “Joker” succeeded in all presented categories necessary for the mastering of film creation. New never before seen character arcs fueled the movie’s story and did not disappoint.

Phoenix plays failed comedian Arthur Fleck, a new alias to the Joker, and shows his development as a man suffering from mental illness, abuse, and a disorder in which he spontaneously laughs, more than less in inappropriate situations.

We first see Fleck as a depressed man doing anything but succeeding in his career, constantly being bullied by anyone, from his coworkers to random ladies on the bus. In this phase, Fleck is pretty much in his pre-Joker phase, but throughout the first two acts of the film, we begin to see the character’s transition from struggling comedian to villainous crime artist.

The film takes place in the well-known Gotham City in the 1970s and is run by Mayor Thomas Wayne, who in the comics, of course, is the father of Batman. Now, as a forewarning, if you have yet to see this movie for some reason, then here’s a potential spoiler warning. In the film, audiences are introduced to Arthur’s mother, played by “American Horror Story” actress Frances Conroy, and see similar mental health issues that we see in Arthur. One of the major twists in the film came with the plot point that Thomas Wayne is actually Arthur’s biological father.

After struggling with workplace harassment and other health issues, Arthur finally snaps after confronting his acclaimed father and his evolution into the Joker begins to take place. Arthur can no longer control his sanity, or lack thereof, and kills three Gotham City businessmen on the train after being threatened and harassed by them. Fleck’s once desire to make people laugh died that night and he became the Joker.

Although he wasn’t caught for the crimes, civilians described the suspect of the train murders as a man in clown-like attire, causing a political movement to arise in response to the unfair treatment of Gotham’s poor citizens. This movement somewhat sparks a confidence boost within Arthur, leading him to ask out Zazie Beetz’s character Sophie, or so he thinks. Now, this plot point also came as a surprise to many as throughout the movie we see Arthur and Sophie going on dates, but near the end of the film, we see it had all been an illusion surfacing from Arthur’s twisted and sick mind.

The imaginative relationship also led to Arthur pursuing an act as a small stand-up performer at a local bar. Fleck’s laughing disorder strikes, which is ironic considering how overall the performance completely failed and no one in the audience laughed. This failure led to local talk show host Murray Franklin, portrayed by Robert De Niro, showcasing Arthur’s atrocious act on the air and later asking Arthur to join him on his show. When finally attending the show, Arthur, for the first time, is referred to as Joker.

Once an awkward, unstable man, Arthur emerges with a surge of empowerment during a very intense interview with Murray Franklin, in which his Joker persona truly comes into effect. He not only admits to the subway train murders, but also, he kills the host on live air. Fleck makes himself known and now everyone knows who the true Clown Prince of Crime really is.

The comedian is arrested and while on the way to the Gotham Police Department, we see Gotham set ablaze in a raging fires caused by violent protests and raids in support of the Joker/poverty movement. Fleck escapes the police car after being hit by an eighteen-wheeler and then proceeds to stand vivaciously in front of his ‘followers’.

The shots featured throughout the film were very strong in response to both character development and symbolism, but during the final act they truly stood out. This film accomplishes many things no one thought could be done again.

“I really enjoyed the film,” said senior Alicia Douglas, “the darkness and Phoenix’s performance as the Joker really just made the movie whole.”

From a critical point of view, reviews were extremely positive and many speculate Oscar nominations are to be expected, but many did have concerns about the film, not because of a new actor taking over, but because of the content promised.

2008’s “The Dark Knight” came with tragedy as a man entered a movie theater during the showing of the film and proceeded to shoot multiple people. The man claimed to be “The Joker” and many feared similar incidents would occur with the release of Phillip’s “Joker”. Petitions to shut down the release of the film were posted, but ultimately, the movie proceeded to be released into theaters throughout the United States.

Personally, I saw the movie at Regal Manchester Cinemas on opening night and, in general, felt comfortable watching the film. Additional security for the film was included, but I was anything but intimidated by said actions.

“I really wasn’t too concerned by it,” claimed Douglas, “people are very aware nowadays so I wasn’t too surprised when I heard about the need for more security.”

Overall, despite its trials and tribulations with the release, “Joker” thrived and became the highest grossing R-rated movie of all time.

This film deserves all of the praise it has received. From a great plot filled with amazing character development and unexpected twists, to Phoenix’s performance and interpretation of the character, this film, in my opinion, is a perfect one as it covers essential comic book movie elements and very much so plays tribute to its predecessors.